The works are going well: all walls are up and plastered. The casting of the ring beam is on-going. 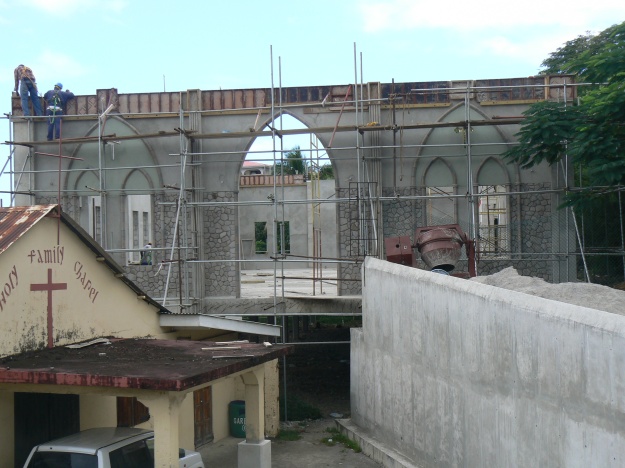 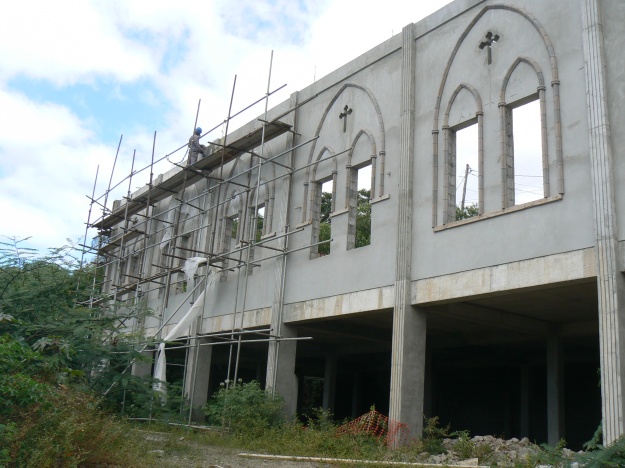 Have a look at the window treatment below.

The renovation works on the Pointe Michel church were initiated by monsignor Reginald LaFleur in 2009. His aim was to upgrade the church to be a worthy and outstanding place of worship, which would encourage  prayer and pilgrimages.

Monsignor Reginald La Fleur  was of the opinion that fundraising for the renovation of the church was bogged down as people did not see anything happening after many years of raising funds.  He felt that the roof renovation works should be preceded by some smaller works of enhancement and beauty which could be completed in a very short time.  These small achievements  would then  re-energize the fundraising for the  roof replacement.

While this seemed to many at the time to put the cart in front of the horse, this strategy and vision  bore  fruits as we will see below.

But before any construction work  on a church is  started much  work needs to be done with the  “LIVING STONES OF THE CHURCH” : the parishioners need to be sensitized, consulted and motivated. They need to be able to visualize  in their minds what improvements are proposed and understand the liturgical reasons why these are proposed.

In March 2009, I presented  to the church committee a PowerPoint plan of action . This  presentation was based on the latest liturgical guidelines and aimed to inspire and open minds to beautiful, yet meaningful and religious symbolic improvements. It  was very much inspired by  Pope Benedict’s  post-synodal apostolic exhortation which stressed “the  profound connection between beauty and liturgy”.

The proposal was to concentrate on the beautification of  the sanctuary and shrine.  This could be achieved by installing new floor tiles and  beautiful  wall panelling . Also by designing and manufacturing beautiful furnishings  such as a new  AMBO, which should be a dignified place to proclaim the Word of God and a celebrant’s CHAIR as he represents Christ presiding over the liturgy.

The proposal included the highlighting of  the shrine of Our Lady of La Salette by colouring the statues .

The presentation was also displayed on  plywood boards at the back of the church for everybody to see.

Norms regarding a National Shrine state that the shrine should be accessible for all. This meant that a wheel chair ramp had to be  constructed.

Following the acceptance of these proposals  came the choice and procurement of materials. It took quite some time to find the right tiles for the sanctuary. Parishioners got the Forestry Division to provide them with local Red Cedar boards, which had to dry for about six months.

My design of  the cedar panelling and ambo included  several  quatrefoils, a religious symbol representing the four evangelists.

The  placing of the floor tiles and  preparing and installation of the varnished Red Cedar panelling started in July 2010.  After these were completed the sanctuary was repainted and  new light fixtures installed.   The final touch was a beautiful new Ambo. All this was completed before the September 2010 La Salette Feast.

When Fr. Peter Wamutitu became parish priest in 2011, he vowed to continue the renovation works. He had the support of a committed parish council and fundraising committee .  Engineer Kendell Johnson, a parishioner, prepared an estimate for the roof and ceiling replacement  on September 24, 2011 with a total estimate of EC $ 458,600.00 .  While this seemed beyond the means of the parish,  a  fund raising drive started in earnest. People had faith !

In the meantime, small achievable steps were taken towards the completion of the project: additional  Red Cedar paneling and altars  were installed in 2011 in the La Salette Shrine and the Sacred Heart alcove by Marshall Cuffy.

Next was the removal of the ceiling, which contained asbestos fibre-cement panels.  With the experience gained from similar works at the Roseau Cathedral, this was done professionally and environmentally friendly in August 2012.

Fundraising, both local and overseas, continued unabated under the leadership of Ms. Carol Activille.  This was done in so many small ways. For example Mrs. Frances Casimir told me that she and a few friends have been selling coffee after Sunday Mass for the last eight years to raise funds for the project.  Parishioners contributed in any way possible, small or big.  There were also  substantial donations from individuals and organisations:   Propagation of the Faith, one of the five Pontifical Mission Societies in Rome,   and German Catholics through Adveniat in Germany provided  substantial funds .

The roof removal and replacement works were put to tender and three contractors responded.  Stevo Construction  was the lowest bidder and got the job.

The roof  renovation works were started in  January  2014  and were completed by May 2014.

Stevenson Joseph and his team also constructed  the new ceiling based on a design by Kendall Johnson. The painting works were done by  Germaine Etienne.  The electrical installation by  Adams Hidges.    The artful painting such as the imitation stonework on the pillars  was executed by  Caesar Catin.

All this was completed just in time for the La Salette Feast in September 2014.

The most recent works were the tiling of the nave, made possible by a  donation of  tiles by FOOD FOR THE POOR (USA).  The work was done by  Francis Daisy and his team in July/August 2015.  Beautiful brass chandeliers were also installed.

Guidelines tell us that a National Shrine should be a worthy and exemplary space for Liturgy, a place of beauty. I think that Dominica’s National Shrine already fits this description although some more work has to be done.