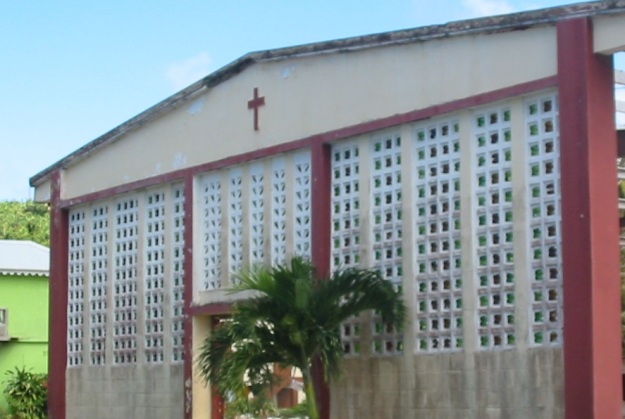 July 4th 1972 was a festive day in Calibishie, as their brand new church hall or multipurpose building was official opened by Bishop Arnold Boghaert.  A large crowd gathered, “including truckloads of visitors from as far as Soufriere and Giraudel”, according to the Dominica Chronicle.

The chapel in CALIBISHIE before hurricane Dean in August 2007

The building was adored with a mural done by Lennox Honychurch, based on a design of Gilda Thibaud Nassief, with the theme “casting the net” which was an appropriate image for a chapel dedicated to St. Peter. 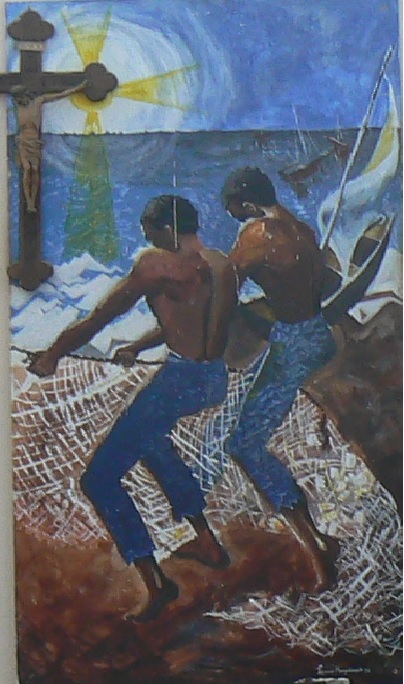 “casting the net” mural in the Calibishie chapel before 2007

This building sustained damage with each passage of a hurricane , in 1979, in 1980 and in 1995. Even as repairs were done after the damage the building kept deteriorating: the steel structure, exposed to a lot of seablast lost its structural integrity; concrete foundations were cracking; the roof developed more and more leaks; a branch of a breadfruit tree fell onto the roof; the chapel flooded several times. 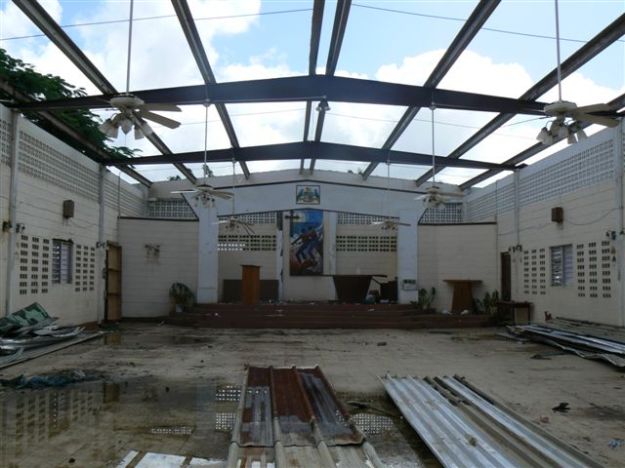 As a result Bishop Gabriel Malzaire, in consultation with the parish priest at the time, Fr. Celsus Auguiste, decided that a new chapel building was needed.

Fundraising for this new chapel was in full swing when Hurricane Dean hit on the morning of August 17, 2007 and lifted & rolled up the roofing. The parishioners had no choice but to look for an alternative place to worship: first at the government school building and later, when that building was also declared unsafe for the public, a local restaurant.

On August 24, 2010  I presented my design for the new chapel  to Fr. Celsus Auguiste and his Calibishie Chapel Reconstruction Committee and it was accepted.

Rev. Fr. Celsus is very happy with the new design

On September 26, 2010  Bishop Gabriel Malzaire performed a ground bearing ceremony with a large crowd in attendance. I had the opportunity to explain the design and its liturgical symbolism. Sadly Fr. Celsus could not attend this important event as his mother died a few hours earlier.

The technical drawings were approved by the Physical Planning Division on November 17, 2010.

Requests for tenders went out, but as the available funds were insufficient, only a section of the building could be started. The construction of the foundations and the erection of the galvanised steel frame were started in August, 2012. Once that was done, the works could only continue as funds were limited: the concrete floor was cast with volunteers between January 11-12, 2013; the concrete blocks were installed with self help in April 2013. 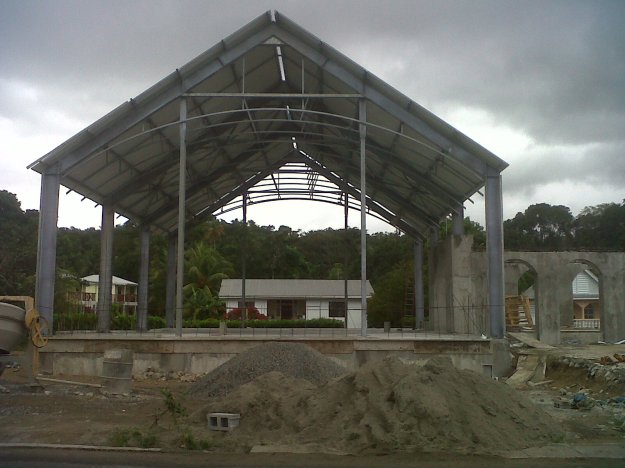 It was slow going but the catholic community, under the leadership of Fr. Conan Shillingford and a hardworking building committee, was determined to finish their chapel.

Finally all their efforts were rewarded when they moved into an unfinished chapel, still under construction, late 2013. The building at that time had no windows nor doors.

The Divine Mercy and patron Saints images and angel murals were installed in 2014. 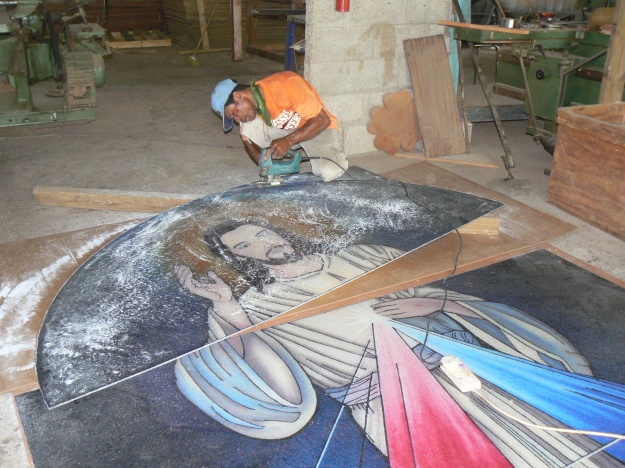 The works and fundraising continued and finally, the chapel was ready for the official blessing on July 2, 2017.  Bishop Gabriel Malzaire in the presence of Fr. C. Sebastian Robert MSFS, parish administrator Deacon Alvin Knight and a large gathering solemnly dedicated the new chapel to Sts. Peter and Paul.

Sadly Fr. Conan could not attend this moment he had work so hard for, as he was on sick leave.

What remains to be done is the construction of a tall bell tower, with toilet facilities and a vestry under neath.

see other articles on this chapel in this blog (below). 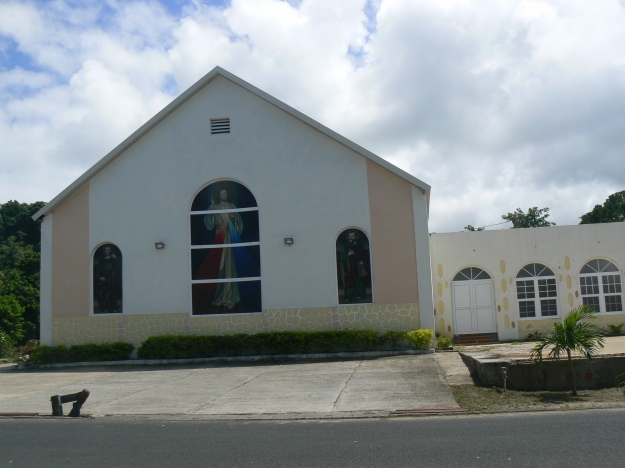 1 thought on “The history of two chapels in CALIBISHIE”