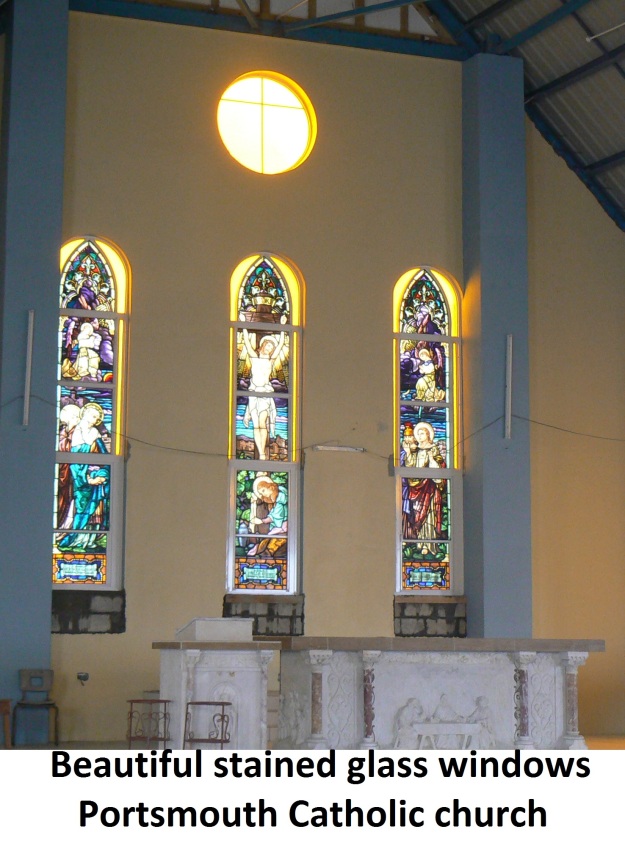 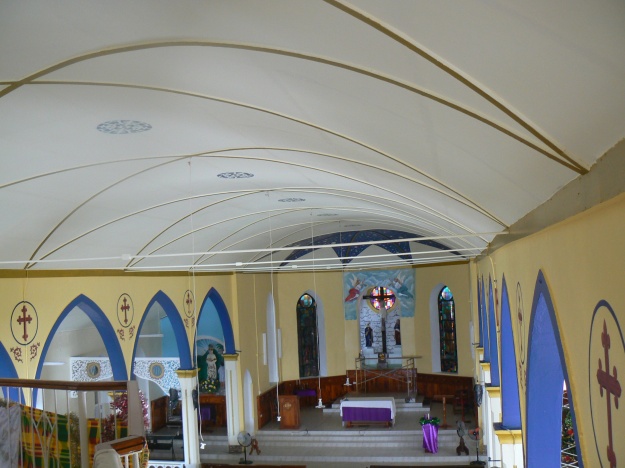 Our Lady of La Salette church In POINTE MICHEL 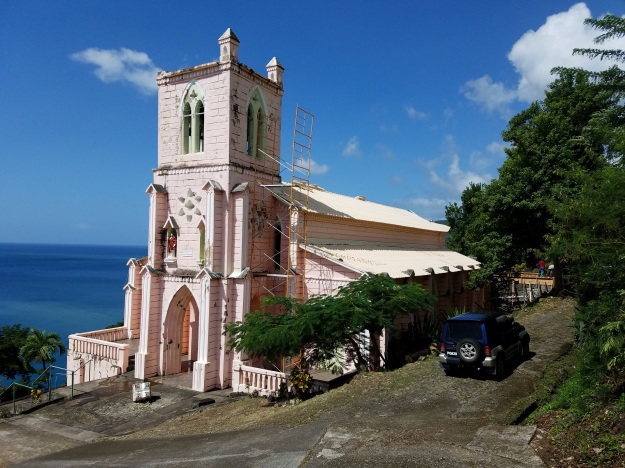 The St. Paul and St. Ann church in Massacre is one of the most beautiful churches in Dominica.

In 1987,  I worked with Fr. Franklyn Cuffy C.Ss.R. to construct a new roof and install a roof covering.

Many years later, I got the opportunity to bring out the beauty of this church in and out, when Fr. Rodney Olive C.Ss.R. teamed up with Mrs. Nancy Nassief to bring Caribbean colours to this church.

The stained glass windows were renovated by Bernard Clerici when Fr. Clement Jolly was Parish Priest.

When the Belgian Redemptorists took over the Parish of St. Paul and St. Ann in 1912, the church at Massacre was in a dilapidated condition and too small for the growing population.

Fr. Cyril Bossuyt C.Ss.R. , who was appointed parish priest early in 1914, decided that the parish needed a new church. This would be the third church on the same location; a portion of land given by the owner of the “Les Pointes” estate.

The first church, a wooden building measuring 80 feet by 25 feet was built by Fr. Casales around 1850. This building was renovated and improved by Fr. Sivienne C.H.S.S, who was “curé de Mahaut from 1871-1907”.         Sadly enough the beautiful work of Fr. Sivienne was destroyed by the great hurricane of September 3- 4 , 1883. We read in the diocesan archives that “ the campanile was blown down, and the whole church collapsed.”

Despite failing in health Fr. Sivienne managed , with the help of the parishioners, to complete  a new church by mid 1885. This second church  was solemnly blessed by Bishop Naughten .  I found a photograph of this church in a publication named “LES MISSIONS CATHOLIQUES FRANÇAISES AU XIXE SIÈCLE ”.

Fr. Bossuyt wanted to build a place of worship worthy of the Divine Occupant of the Tabernacle and he enlisted the help of his confrere to design a beautiful edifice.

The talented Fr. Cuvelier C.Ss.R, came for that purpose from St. Croix and can be considered the architect of the present day Massacre church. He designed it in the neo-gothic style. This style invokes the great Gothic cathedrals built in Europe in the Middle Ages.   For many people this is still the preferred style for a catholic place of worship.

The demolition of the old church and the preparation of the grounds started sometime in 1916.  It took a full six months to blast the rocks in order to create a plateau to accommodate a larger church 125 feet long and 55 feet wide .

Early in 1917 the corner stone of the new church was blessed, and less than two years later  the new church  was solemnly blessed by Bishop Philip Schelfhaut, on Sunday December 1, 1918.

Fr. Bossuyt’s completed his work by installing beautiful stained-glass windows in 1922 and importing a church bell in 1936. The inscription on the bell, still in use today, reads : “ NOMINOR JOSEPHUM + C. BOSSUYT  MAHAUT DOMINICA ”.    There is also a smaller bell with the following inscription : “PIERRE JOLLY ESQR. 1820”.

THE ECCLESIASTICAL BULLETIN OF ROSEAU  aknowledged that the priest’s success was due to the parishioners :  “ But had the people of Mahaut not assisted him as they did, unselfishly furnishing free labour, day after day, night after night in the bright moonlight, and generously lending all the financial help they could, the church would never have been completed.  Thanks to the parishioners , the church was completed in two years and entirely free of debt.”

The church was damaged by a hurricane in 1930 . Bishop Moris reported that most galvanised roofing sheets were torn off. It also fared badly during the passage of hurricane David in 1979.

In 1987   Fr. Franklyn Cuffy C.Ss.R. embarked on the renovation of the roof. The contractor was Bertrand Bruno from Massacre. Fr. Cuffy also ordered the coloured glass to repair the stained glass windows. His successor, Fr. Clement Jolly C.Ss.R renovated 14 stained glass windows. The artisan was Bernard Clerici from France who spend several months in Dominica to do the work.

In 2003 Fr Rodney Olive C.Ss.R. consulted Mrs Nancy Nassief about a new colour scheme for the exterior and interior of the church. In addition to the painting works, he instructed my team to design and install a new screen and stand for the tabernacle, create a new ambo and a cover for the baptismal font. With left over coloured glass from 1987, pivoted windows were fabricated and installed.

Fr. Rodney’s enhancement works ended in 2004 with the installation of tiles on the floors.

The description published in THE ECCLESIASTICAL BULLETIN OF ROSEAU in 1930 can be repeated today :

“ What used to strike one before, on entering the church, was the height of its graceful pillars and the elegance of its pointed arches, which raised one’s mind and heart almost naturally to heavenly thoughts. Now that the church has been beautifully painted and decorated, the architectural lines being more in relief, the effect is simply marvellous.

Indeed this is a church worthwhile visiting and worshipping in.