damage to the La Plaine church 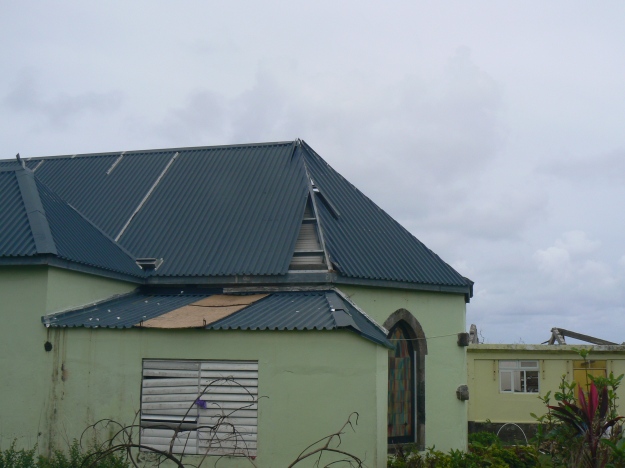 “With the reflection of the Sunlight on the windows the interior of the Church in La Plaine presents itself as a serene place of worship reflecting the different colours of the rainbow which can be associated with the different peoples in the world”  as described by Rev. Fr. Vincent ESPRIT FMI

In 1864, Mrs. Anne Elizabeth Royer made a grant to Bishop Micheal Monaghan,
and his successors in office, of the La Plaine estate, containing a little more than
161 acres. The present church is located on what is left of this grant, barely 11
acres.
The Parish of St. Francis Xavier was canonically established in 1864. The parish
priest at that time was Father Eugène Vigroux, a young French priest, who started
the present church building . He was allowed to collect and use the cut stones of
the Tabary Estate by its proprietor Mr. Thomas Davies. By the time Fr. Vigroux
left the parish, in 1870, the church was far from completed and the completion
became the task of the newly arrived FMI Missionaries from France.
Three members of the French congregation named “Les Fils de Marie Immaculée”
(FMI) or Sons of Mary Immaculate arrived in Dominica on February 7th, 1872.
Members of this congregation have served the La Plaine Parish faithfully and
consistently up to the time of my writing in March 2014. Today we have Fathers
Louis Vrignaud and Michel Favalier in this parish
Father James Hipolyte Couturier was the first FMI missionary to be assigned to La
Plaine and he became for 39 years, “the heart and soul of the whole district by
his unceasing labours.” He remained most of these 39 years alone in the parish,
without any outside help or support.
Barely a year after his arrival, the parish church, “the very same one which stands
there today” , was completed and dedicated to St. Francis Xavier. Gradually Fr.
Couturier improved the church “by painting and decorating it handsomely”. He
also built a spacious new school, erected a calvary in front of the church and laid
out a beautiful garden. Then he went on to construct a church and presbytery at La
Roche .
But disaster loomed on the horizon in the shape of the hurricane of September
1883. The church of La Roche, just finished, was battered down to a heap of ruins,
the roof borne on the wings of the winds to a neighbouring precipice and the walls
entirely destroyed. Luckily the La Plaine church only suffered minor damage.
In 1908 Fr Hypolyte Couturier ( +1911) resigned his office and put the parish in
the hands of Fr. Ferdinand Baudry FMI.
8 years later the hurricane of 1916 caused considerable damage to the church and
presbytery of La Roche and to the presbytery of La Plaine. It also levelled to the
ground the schoolhouse of La Plaine. 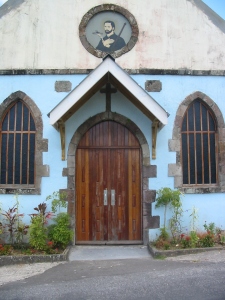 All the damaged buildings were repaired and the schoolhouse raised from its ruins.
After completing all these construction project, Fr. Baudry’s hoped to occupy his
time with taking care of the spiritual interests of the parish but then suddenly his
“ his health gave way” and he had to return to France. His place was taken in
1928 by Father Chaigneau FMI, a young and energetic priest.

Two years later, the hurricane of 1930, badly damaged the church and presbytery
of La Plaine . Again the parish priest of La Plaine became a builder and “in a
little over a year’s time all the damaged buildings were repaired, and a large
substantial schoolhouse erected at La Plaine, as well as a spacious and
comfortable presbytery erected at la Roche”. But the pity is that the good Father
lost his health through overwork and had to leave the island early in 1932.
Father Joussement succeeded him .

It took a able man like Fr. Jean Martin FMI to reconstruct the roof and also
the other chapels in the Parish namely the chapel in Boetica, which was a heap of
stones.
The most recent renovations were started by Fr. Jean Guéry FMI, when a
complete new steel framed roof structure was installed with Aluminium roof
covering.
Fr. Vincent Esprit FMI renewed the windows and tiled the floor. He is also
responsible for the colourful windows and the round window of St. Francis Xavier
above the front entrance. 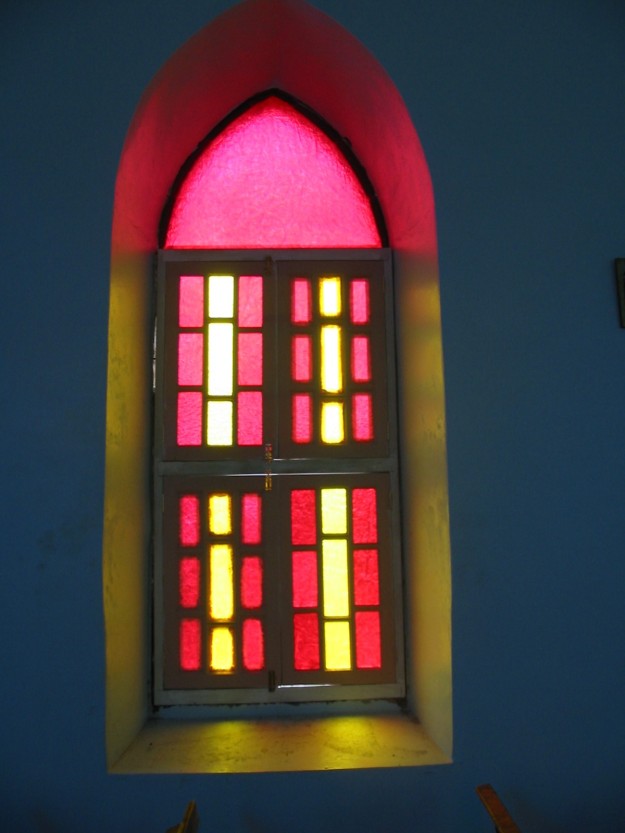 The FMI Fathers or Peres de Chavagnes (FRANCE) have been very good to this
parish , providing the people with spiritual guidance and direction and living
among them, in sometimes, extreme poverty but never wavering dedication to
spreading the Word of God, under the motto “ GOD AMONG US” “VERBUM
DEI” as can be seen above the side entrance of the La Plaine church.