The St. Anthony of Padua chapel in Toucarie

One of the places in Dominica,  I really experienced  the Holy Spirit working in the People of God, is Toucarie.  It was a privilege to assist this Catholic community with the renovation of their chapel between 2004 and 2009, an exciting  experience of  “ Church building church together” .

The chapel, dedicated to St. Anthony of Padua, overlooks one of the most beautiful bays in Dominica.

We know from THE ECCLESIASTICAL BULLETIN OF ROSEAU  that Fr. William Martel, the builder of the first church in Roseau,  erected a chapel in 1731 on the Malalia Bay, also called “Trou Carré or “Toucarry” or Toucarie  :   “Fr. Martel  says so himself in a letter to his superiors [that he built  a chapel in Toucarie].  Up to the present there stands, on or near the same spot, a chapel dedicated to St. Anthony of Padua, and nearby is a graveyard where  a certain Father Dominique was buried many years ago”.

In May 1925 Bishop Moris wrote that it was Father Paul Tavernier  FMI  “who built the present [=1925] chapel of Toucarry”.  This chapel was blessed on February 24, 1886  by Bishop Michael Naughten , Bishop of Roseau from 1879 till his death in1900.  He was assisted by six priests, presumably Fr. Paul’s French colleagues, the Pères de Chavagnes or Fils de Marie Immaculée (F.M.I.) . “The congregation” wrote Bishop Naughten “was very large. A very poor collection was taken up.  However , there is nothing but poverty at present in Dominica”.

Fr. Paul Tavernier was the priest who died, 10 months later,  during a fire on board of the steamship “France” as I have recounted before.

It must have been Fr. Gustave Berthomé  F.M.I., Parish Priest of Portsmouth from 1888 till his death in 1905, who installed the small church bell that still rings over the bay of Toucarie today.  The 8” diameter bronze bell, named ANTOINETTE, was cast in 1898 in  the foundries of the ASTIER family in the French town of Nantes. 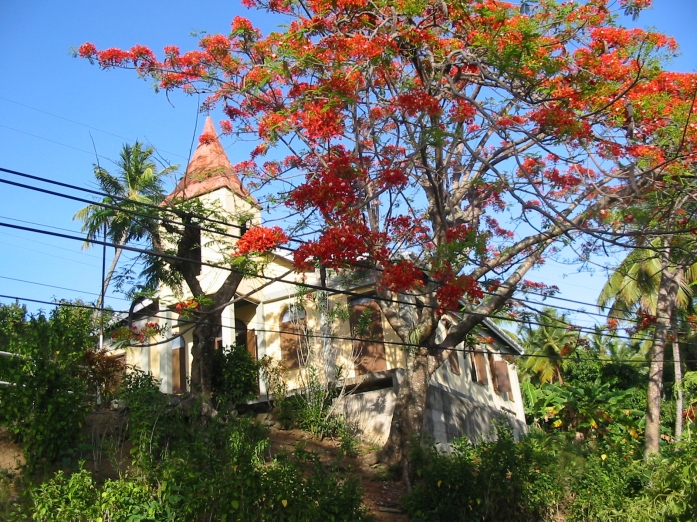 The chapel that Fr. Paul built and that Bishop Moris mentioned in his 1925 article must have been in a dilapidated state by 1955.   Euphemie  McIntyre, née Douglas recounts that her father rebuilt the chapel in 1956  [ see “REACHING FOR THE TOP: The extraordinary Life of Robert Bernard Douglas”] .  The uniquely shaped tower is indeed dated June 1956.

It was Fr. Charles Martin, who asked me in 2004 to assist the Catholic community in Toucarie as it seemed that the chapel was sinking .

The works to construct a retaining wall to stabilize the foundations and flooring, were started on Carnival Tuesday 2004.  To my surprise and delight, a sizable team of volunteers, men and women, showed up during carnival to do the excavation  for the retaining wall.

This wall and a new roof  were completed just in time for the feast of St. Anthony in June 2005.  The local team of workers was directed by Hubert Carrette and Sebastian Royer, of which I have fond memories.

All these works had to be coordinated by the chapel renovation committee, with whom I had many meetings late at night.

After a pause of a few months, which enabled additional fund raising, works were started on the  tower,  which was weakened by the earthquake of November 21,  2004 .   New arched windows with coloured plexiglass,  installed in September  2007, enhanced the liturgical space.  A new entrance door completed the building in 2008.

Recently, access has been created from a side road so that worshippers no longer have to climb 24 steps to reach the chapel.

Visit this beautiful chapel and support this faithful Catholic community. 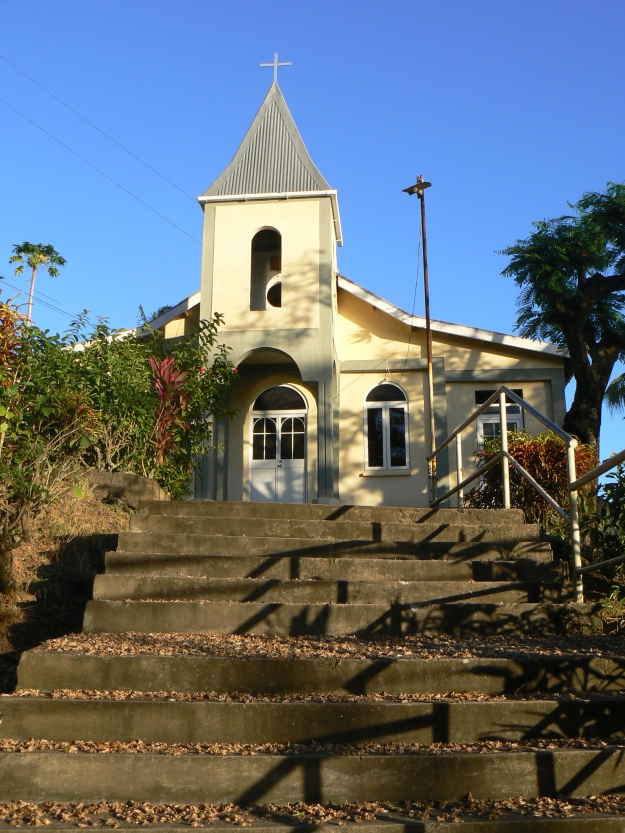